Edmonton Listeni/ˈɛdməntən/ is the capital of the Canadian province of Alberta. Edmonton is on the North Saskatchewan River and is the centre of the Edmonton Capital Region, which is surrounded by Alberta’s central region.

Edmonton’s historic growth has been facilitated through the absorption of five adjacent urban municipalities (Strathcona, North Edmonton, West Edmonton, Beverly and Jasper Place) and a series of annexations ending in 1982. Edmonton serves as the northern anchor of the Calgary–Edmonton Corridor. Known as the “Gateway to the North”, the city is a staging point for large-scale oil sands projects occurring in northern Alberta and large-scale diamond mining operations in the Northwest Territories.

Edmonton is a cultural, governmental and educational centre. It hosts a year-round slate of festivals, reflected in the nickname “Canada’s Festival City”. It is home to North America’s largest mall, West Edmonton Mall (the world’s largest mall from 1981 until 2004), and Fort Edmonton Park, Canada’s largest living history museum.

Edmonton has a humid continental climate (Köppen climate classification Dfb) with relatively low precipitation, and falls into the USDA Plant Hardiness Zone 4b. 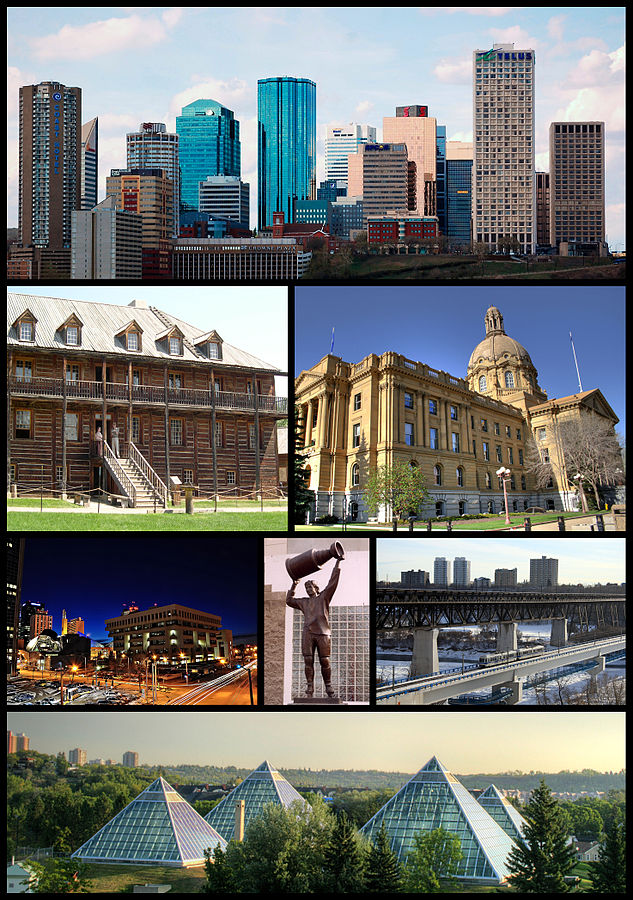 The Francis Winspear Centre for Music was opened in 1997 after years of planning and fundraising. Described as one of the most acoustically perfect concert halls in Canada, it is home to the Edmonton Symphony Orchestra and hosts a wide variety of shows every year. It seats 1,932 patrons and houses the $3-million Davis Concert Organ, the largest concert organ in Canada. Across 102 Avenue is the Citadel Theatre, named after The Salvation Army Citadel in which Joe Shoctor first started the Citadel Theatre Company in 1965. It is now one of the largest theatre complexes in Canada, with five halls, each specializing in different kinds of productions. On the University of Alberta grounds is the 2,534-seat Northern Alberta Jubilee Auditorium, which were undertaken over a year of heavy renovations carried out as part of the province’s 2005 centennial celebrations. Both it and its southern twin in Calgary were constructed in 1955 for the province’s golden jubilee and have hosted many concerts, musicals, and ballets. The Edmonton Opera uses the Jubilee as its base of operations. On the front of the building is a quote from Suetonius’ Life of Augustus: “He found a city built of brick – left it built of marble.”

The Old Strathcona neighbourhood is home to the Theatre District, which holds the ATB Financial Arts Barns (headquarters of the Edmonton International Fringe Festival), The Walterdale Playhouse, Catalyst Theatre, and the Varscona Theatre (base of operations for several theatre companies, including Teatro la Quindicina, Shadow Theatre, Die-Nasty, and Oh Susanna!). Edmonton was named cultural capital of Canada in 2007. The Ukrainian Dnipro Ensemble of Edmonton, organized in 1953, preserves the Ukrainian musical culture within the parameters of the Canadian multicultural identity.

Edmonton’s main summer festival is K-Days, formerly Klondike Days, Capital Ex and originally the Edmonton Exhibition. Founded in 1879, the Edmonton Exhibition was originally an annual fair and exhibition that eventually adopted a gold rush theme, becoming Klondike Days in the 1960s. Northlands, the operators, renamed the festival to “Edmonton’s Capital Ex” or “Capital Ex” in 2006. In 2012, Edmonton Northlands conducted a poll to rename the festival that resulted in changing the name to “K-Days”. Activities include carnival rides and fairways, music, trade shows, and daily fireworks.

Since 1960, the Sourdough Raft Races have also been a popular event. Later in November, Edmonton plays host to the Canadian Finals Rodeo and Farmfair; this is a significant event in Canada’s rodeo circuit and second only to the National Finals Rodeo in Las Vegas in prestige.

The Edmonton International Fringe Festival, held in mid-August, is the largest fringe theatre festival in North America and second only to the Edinburgh Fringe Festival worldwide. In August, Edmonton is also host to the Edmonton Folk Music Festival, one of the most successful and popular folk music festivals in North America. Another major summer festival is the Edmonton Heritage Festival, which is an ethnocultural festival that takes place in Hawrelak Park on the Heritage Day long weekend. Many other festivals exist, such as Interstellar Rodeo, the Free Will Shakespeare Festival, the Dragon Boat Festival, the Whyte Avenue Art Walk, and the Edmonton International Film Festival.

There are many museums in Edmonton of various sizes. The largest is the Royal Alberta Museum (RAM), which was formerly known as the Provincial Museum of Alberta until it was renamed in honour of Queen Elizabeth II’s 2005 Alberta centennial visit. The RAM houses over 10 million objects in its collection and showcases the culture and practices of the diverse aboriginal tribes of the region. The main building, overlooking the river valley west of the city centre in the Glenora neighbourhood, was opened in 1967 and is now in the early stages of large-scale redevelopment.

The Telus World of Science is located in the Woodcroft neighbourhood northwest of the city centre. It opened in 1984 and has since been expanded several times. It contains five permanent galleries, one additional gallery for temporary exhibits, an IMAX theatre, a planetarium, an observatory, and an amateur radio station. The Edmonton Valley Zoo is in the river valley to the southwest of the city centre.

The Alberta Aviation Museum, located in a hangar at the City Centre Airport, was built for the British Commonwealth Air Training Plan. Its collection includes both civilian and military aircraft, the largest of which are a Boeing 737 and two CF-101 Voodoos. It also has one of only 3 BOMARC missiles in Canada.

The Prince of Wales Armouries Heritage Centre is also home to the Loyal Edmonton Regiment Military Museum. The museum is dedicated to preserving the military heritage and the sacrifices made by the people of Edmonton and Alberta in general. The museum features two galleries and several smaller exhibits. The collection includes historic firearms, uniforms, souvenirs, memorabilia, military accoutrements, as well as a large photographic and archival collection spanning the pre-World War One period to the present. The museum features an exhibit on the role of the 49th Battalion, CEF in Canada’s Hundred Days Offensive. The Telephone Historical Centre is a telephone museum also located in the Prince of Wales Armouries Heritage Centre in central Edmonton. In addition to a collection of artifacts tracing the history of the telephone, the museum has its own theatre featuring a brief film led by the robot Xeldon.

The Alberta Railway Museum is located in the rural northeast portion of the city. It contains a variety of locomotives and railroad cars from different periods, and includes a working steam locomotive. Since most of its exhibits are outdoors, it is only open between Victoria Day and Labour Day.

Fort Edmonton Park, Canada’s largest living history museum, is located in the river valley southwest of the city centre. Edmonton’s heritage is displayed through historical buildings (many of which are originals moved to the park), costumed historical interpreters, and authentic artifacts. In total, it covers the region’s history from approximately 1795 to 1929 (represented by Fort Edmonton), followed chronologically by 1885, 1905, and 1920 streets, and a recreation of a 1920s midway. A steam train, streetcars, automobiles and horse drawn vehicles may be seen in operation (and utilized by the public) around the park. The John Walter Museum and Historical Area (c. 1875 to 1901) is on the Canadian Register of Historic Places. The University of Alberta operates its own internal Museums and Collections service.

The Art Gallery of Alberta (AGA) is the city’s largest single gallery. Formerly housed in an inconspicuous 1970s building downtown, the AGA collection had over 5,000 pieces of art. The former AGA building was demolished in July 2007 to make way for construction of a new facility designed by Randall Stout. It was estimated to cost over $88-million and the amount that Edmonton City Council donated towards its construction was met with some controversy. The AGA officially opened on January 31, 2010. Independent galleries can be found throughout the city, especially along the 124 Street/Jasper Avenue corridor, known as the “gallery walk”.

There are several key areas of nightlife in the city of Edmonton. The most popular is the Whyte Avenue (82 Avenue) strip, located between 109 Street and 99 Street; it has the highest number of heritage buildings in Edmonton, and the nightlife (bars, clubs, and restaurants) are located throughout, but mostly west of Gateway Boulevard (103 Street). Once the heart of the town of Strathcona (annexed by Edmonton on February 1, 1912), it fell into disrepair during the middle of the 20th century. Beginning in the 1970s, a coordinated effort to revive the area through the establishment of a business revitalization zone has produced an area rich with restored historical buildings and pleasant streetscapes. Its proximity to the University of Alberta has led to a high number of establishments ranging from restaurants and pubs to trendy clubs while hosting a wide variety of retail and specialty shops during the day. This area also contains two independent movie theatres: the Garneau and Princess theatres, as well as several live theatre, music, and comedy venues.

Downtown Edmonton has undergone a continual process of renewal and unprecedented growth since the mid-1990s. Many buildings were demolished during the oil boom, starting in the 1960s and continuing into the 1980s, to make way for office towers. As such, there have always been numerous pub-type establishments, as well as many hotel lounges and restaurants. The past decade has seen a strong resurgence in more mainstream venues. Edmonton also has a high demand for pub crawl tours in the city. Various clubs are also to be found along Edmonton’s main street, Jasper Avenue. The Edmonton City Centre mall also houses an Empire Theatres movie theatre, featuring nine screens. The nonprofit Metro Cinema shows a variety of alternative or otherwise unreleased films every week.

West Edmonton Mall holds several after-hour establishments in addition to its many stores and attractions. Bourbon Street has numerous eating establishments; clubs and casinos can also be found within the complex. Scotiabank Theatre (formerly known as Silver City), at the west end of the mall, is a theatre that features twelve screens and an IMAX.

Big or small, younger or older, we will tailor a program to suit your needs.

The ultimate way to learn a language and a lifestyle at the same time.

Our hallmark comfort and convenience, with the addition of private bathroom.

A unique program for students interested in an alternative to the usual urban homestay.

Convenience and comfort of a ready to live apartment.